Skip To Content
Hey Ocean! at Zaphod's in 2009. All photos by Ming Wu, from the Apt613 flickr pool.
Advertisement:

“Our philosophy: no racism; no aggression; no gender bias; entertain and enlighten; no attitude or pretensions; fair prices and fair measures; a musical and social alternative; friendly staff and fast courteous service; respecting our audience and gaining their respect; all our guests, especially women, should feel comfortable and safe here.”

Ottawa’s live music landmark, Zaphod Beeblebrox, more commonly known as just Zaphod’s, opened its doors almost 25 years ago, with a unique format, a completely unpretentious atmosphere, and a credo that remains unchanged, as the venue carries on into the next chapter of its existence at the edge of the universe. Its formula of live bands, DJ’s, and a variety of other events, with emphasis on supporting local musicians, was established by former owner, Eugene Haslam, whose vision was of creating a live music venue like no other, that welcomed and provided a safe haven for musicians and patrons alike, and offered a refreshing alternative to the local bar scene.

When news of Haslam’s desire to sell Zaphod’s leaked just over a year ago, it sent a shock wave of worry over the possibility of losing such an institution. Ottawa residents needn’t have fretted, as the ownership made its natural transition over to the hands of resident DJ, Ryan King (DJ Lowpass), who officially took over the reins this past February. After speaking with King, it was evident to see, and a relief to hear, that he too, intends to move forward with the same vision, with the help of his long-time, loyal staff, and a growing network of professional contacts. 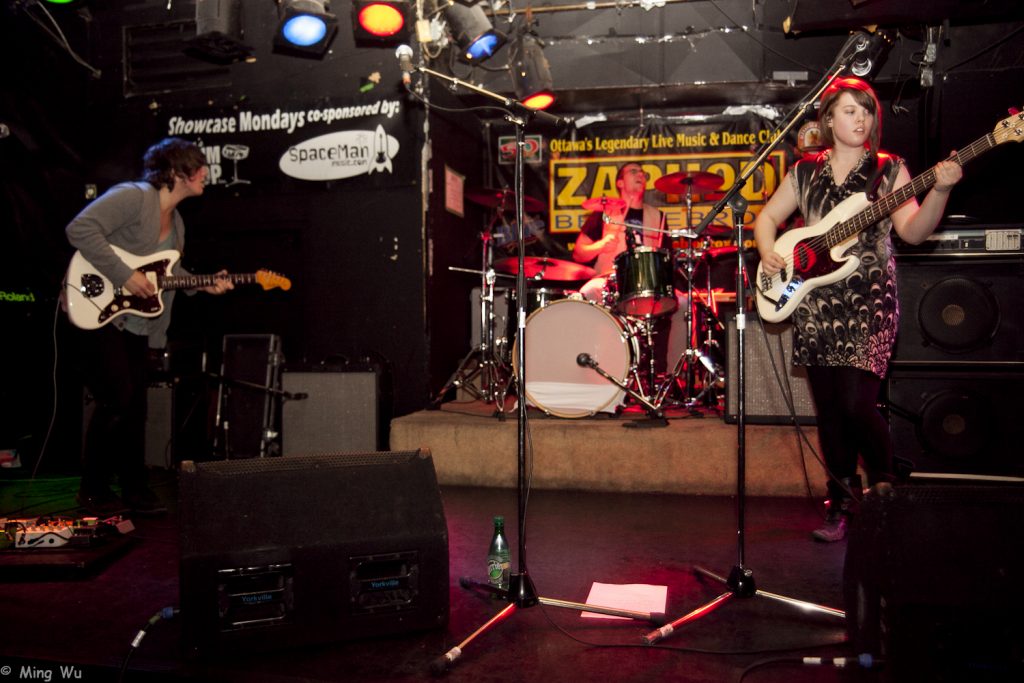 Apt613 chatted with Ryan King about life, the universe, and everything that’s in store for the next phase of Zaphod’s. This interview has been edited.

Apt613: Tell me about your experience as a DJ, and how you came to work here at Zaphod’s.

R.K.: I got started as a DJ when I got asked to do a burlesque show. Then I got asked to another, and another, and the next thing I knew it became 3 nights a week. It was an awesome experience and I got a lot of connections from that community. I also DJ’ed at the Aloha Room on Bank St. on Friday nights, which later parlayed into getting the gig here about 3-½ years ago, doing Electronic Mondays. It was great being part of the staff, and I got to see what was going on behind the scenes. I’ve grown up in Ottawa all my life. When we were younger, this was the bar we’d come to because it offered an alternative to all the other more “top 40” cultured bars out there.

It’s great that Eugene handed it over to people embedded and ingrained in the place, to carry on where he left off.

That was the biggest fear– who Eugene would end up selling it to. Or that it would become just another top 40 bar, or get ripped out to put in a fast food joint or something. It would have been a real shame to lose this place… it’s an Ottawa institution, really. I knew Eugene was slowly but surely looking to sell the place, but it took about a year and a half to get everything figured out on how it was going to happen. It ended up being this past February when it became finalized. And then, I broke my ankle, which couldn’t have been worse timed.

Thank goodness you’ve got some really great staff here that have been here a long time, that you have to rely on to run this place.

The general manager, Chris Poirier: he’s a great guy, been here for 12 years. Another full-time guy here, Matt Collins, or Matt ’Spag’, as everyone calls him, bartender of 10 years, who’s also a member of the HELLbros band. Those are the two full-time people here, everyone else works shifts here and there. Has the idea of live bands, followed by a DJ been the format from day one? There seems to be a happy medium of the two, which is a rare thing to see in a venue.

Yes, it has. Aside from the economic reality of having it that way, it caters to everyone. Since its glory days in the 90’s and early 00’s, it would be slammed for the band, and then a lot of those people wouldn’t leave, with others who would show up for the DJ’ing segment. It was a golden formula to keep it busy all night. We want to keep running live music every Wednesday through Saturday, with acts ending around 11:30pm, and DJ’ing after that, but it’s very flexible depending on the number of bands. Also, if people are really enjoying the headliner, they may play a little longer.

Your website is always updated, and I like the fact that you go to the trouble of posting up a mini bio of each band who plays here, complete with links to their webpages/social media pages. Are all the events still pretty much intact? Any changes?

I do it myself directly. I used to be an IT guy before the DJ’ing stuff started, so that‘s come in handy. We’ve moved “Electronic Mondays” to Wednesdays, but it’s now called, “Lost In Space” w/DJ Lowpass. Wednesdays is just a better night to run this kind of event, so we just moved it. “Showcase Mondays”, where we featured local acts, has been put on hold right now. We’ll still have the same kind of thing on Wednesday nights instead, and we may still bring it back on Mondays occasionally because it was such a strong brand. We’re going to start charging a $6 cover on Wednesdays, just so the bands can make a little bit of money.

We have rotating DJ’s on Thursdays: ”Four Play Thursdays”, featuring 4 of Ottawa’s favourite DJ’s. Jas Nasty does The Vinyl Frontier, who shows up with her gigantic crates of records, and plays them all night, which not a lot of people in town still do. Jon Deck, former member of A Tribe Called Red, will also be DJ’ing, and Pete Shredz, who plays drum/bass and jungle music, which has built up a community following, is doing one Thursday a month for now. Brian Flood (Floodzi), will be moving from Fridays to Saturdays. Then there’s [DJ] Emmett, who’s come back to DJ with us, who’ll be slotted in on Fridays.

“Trailer Park Bingo” on Sundays will continue. I find you need some kind of wacky, zany event on Sundays. We’re trying to do more and more of these kinds of events as time goes on.

Burlesque is also getting huge. Lots of places have shows regularly. Holly Sin is going to be working with me to produce some burlesque shows here every alternate month the House of Targ has theirs. We’re going to call it tentatively, “Burlesque, the Universe, and Everything”, with the first one to be held in June. It’s a perfect venue, being that our stage is high, so there’s great sightlines which is essential for that kind of show. The Most Serene Republic at Zaphod’s in 2009.

What’s happened to your “Live Rock Karaoke” that was held every first Thursday of the month?

We stopped doing that because one of the band members had to pull out to deal with health issues. That was a great event: you got to sing on a real stage, through a real sound system, and with a real band. We started getting some regulars who’d come out every month, who got to sing on the same stage bands like the Stones played on. At some point, almost every musician that’s either been on their way up or down in their career, has played on the Zaphod’s stage. If we can find a way to do it again, we’ll certainly bring it back.

Do you play a lot of local artists’ music as part of your DJ set? What other kinds/genres of music do the DJ’s spin?

Absolutely, as much as we can. When bands come in with merch, we ask for their CD, so we have a wallet full of local band material. I still play a lot of house music, but if I’ve got a rock band that have just finished, and it’s a rock crowd, I’ll find a way to play more of a rock set. Emmett’s the expert on that: he’s got such good taste in music, and has an amazing collection. Basically, he plays the music he wants to play, which is what the other DJ’s do as well. It’s an open format, not any one genre…we just play music. I’m trying to get this place on the weekends to playing really good, but different music.

Who books the bands here?

Shawn Scallen from Spectrasonic books most of the touring acts. He’s the most organized and professional booker I know of in town. He’s really got his finger on the pulse when it comes to knowing who’s out there and attracting crowds. I book some of the bands, along with a group of others, like Eric St. Cyr, who organizes most of the local acts. He’s a full-time musician and also runs his own music school, so he’s very connected in the music community.

I see nothing’s changed on the bar drink menu, including your Pan Galactic Gargle Blaster, although you have added your own brand of beer on tap.

We have a Beau’s beer on tap right now. We’ve named it “Life, the Universe, and Everything”, but it’s only for a limited time while quantities last. Beau’s has a bit of history with Zaphod’s, since we were one of the first bars to actually carry it when it first came out. So they approached us and asked us if we’d be interested in having our own Zaphod’s beer on tap.

Any other physical changes planned for Zaphod’s?

We have a ramp for wheelchair accessibility located at the front entrance now, instead of the original entrance through the alley. I’m also fixing up the accessible bathroom that exists here. Some technology improvements to the stage lighting will be done as well. Other than that, nothing else physically will be changed. After almost 25 years, things like those stickers all over the bar fridges will remain intact; you can’t get rid of stuff like that. We want to make sure people know that nothing has really changed, the philosophy is still the same. Those posters stating that are still on the walls.