Two of our reviewers checked out ‘da Kink in My Hair. Click here for our other review, by Brian Carroll.

Trey Anthony’s documentary is entitled When Black Mothers don’t say I love you. The emotions captured in that title, ones of abandonment and trauma, are also reflected in every scene and every character of his award-wining play, ‘da Kink in my Hair. From the grieving mother wishing she had told her son that she loved him, to the daughter whose mother cursed her for being “too black,” ‘da Kink in my Hair is a musical of genuine character.

‘da Kink in my Hair’s drama takes place all in one room — the beauty salon of Anthony’s character, Novelette. The set is vibrant and lifelike, walls intricately etched into the bricks of Novelette “Netty’s” beauty salon. Because of this constrained space, ‘da Kink forsakes a complicated plot for an intimate anthology of short monologues held together with unifying themes of love, loss, abandonment and trauma. 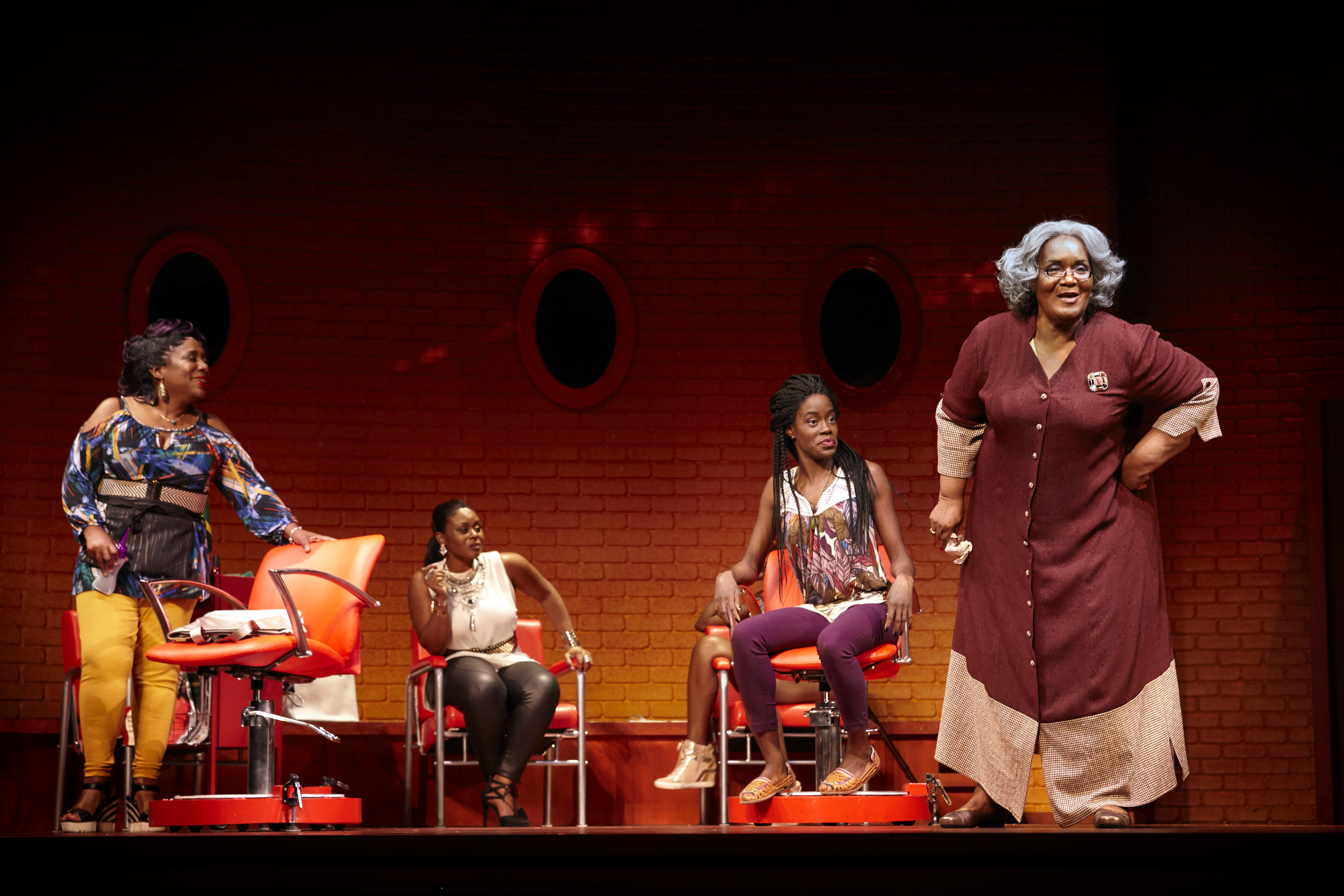 At the heart of it all is Novelette, whose beauty salon acts as a vehicle for her patrons to vent their frustrations, to spill their heart and soul to the audience. The monologues hit quick and hard, touching on a range of emotions as wide as the human experience.

‘da Kink promises that it will make the audience laugh and cry. I was skeptical of that claim. After the first musical piece, I was laughing. By the end of the second, I was in tears. It was hard to pinpoint where the transition happened.
Maybe it was the music that helped ease the transition. The score is composed beautifully, the lyrics are catchy and punchy, and the actors can sing! I had more than a few tunes stuck in my head by the end of the play. There were some issues causing a faint crackling in the character’s voices after the intermission, but that was fixed quick enough so as not to become too distracting.

The lighting was perfect — well, almost. The movie star Charmaine, portrayed by Krystle Chance, was appropriately decked out in sparkling jewelry that had a nasty habit of reflecting the spotlight straight into my eyes. Sharmaine’s story is one of the lighter ones, but no less affecting, setting up the final and most moving monologue of the night.

I shivered at Virgilia Griffith’s visceral portrayal of a Jamaican-Canadian girl adjusting to Canada’s cold weather and newfound trauma. Her performance sits with you long after its over and her words effortlessly transition into a haunting musical piece that uses the shedding of winter garments as a metaphor for shedding the scars of abuse.
The audience loved the performers, awarding them multiple standing ovations.

The fan favourite was Miss Enid, portrayed by Brenda Phillips, the elderly woman whose monologue of finding love in old age is one of the few that elected howls of laughter from the audience. Some audience members couldn’t tell when the comic relief ended and the drama began, as confused laughter would sometimes erupt during the serious scenes of a character’s monologue. This was to no fault of the actors, though — each one nailed their respective characters and the entire play went by without a hiccup or pregnant pause.

The story of every character is so amazing and heartfelt individually, and yet at the end of the play I was left feeling a little unsatisfied. I think what ‘da Kink in my Hair does, it does so well that it’s hard to notice what it might be missing. The greatest flaw of the play lies not in what it has, but in what it doesn’t: a plot. ‘da Kink sacrifices conflict on the stage to demonstrate the internal conflict raging inside each of these characters. The big question then, is what do you value in a story? Is it the sum of its parts, its cohesion, its plot, and its resolution? If it is, you will find yourself disappointed. These are things ‘da Kink does not concern itself with.

If instead you value character, heart, unique performances and an honest portrayal of the human condition through the eyes of Trey Anthony’s characters, then ‘da Kink in my Hair is a play you cannot let yourself miss.

‘da Kink in My Hair (produced by NAC English Theatre and Theatre Calgary) is playing at the National Arts Centre Theatre (53 Elgin St) from October 19 to November 5. Tickets are available at the NAC Box Office and online at www.nac-cna.ca for $25, $49, $65 and $75. Student discounts and $15 rush tickets are available. Theatre Review: Between Breaths at the NAC—until 05.18.19