Over the past little while, I have been writing about the remarkable ca. 1938 photos of Ottawa streetscapes. These photos show us the Ottawa that Jacques Greber would have seen when he was conducting his preliminary planning studies. What is of particular interest – and something not yet remarked upon by others – is that what we are seeing are not his own photographs, but ones taken by photographers working for the federal Department of Public Works. These photographers, unlike Greber, would have had intimate knowledge of the city. So it would be worth asking the question: who were these people behind the lens? Can we narrow down this question to: Who is the photographer? 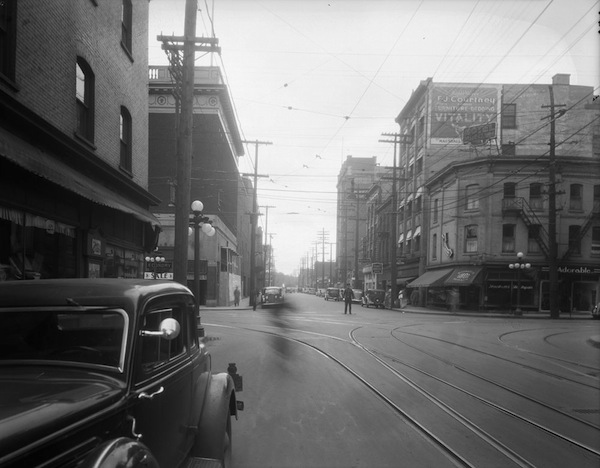 There is no good answer, but we must start somewhere. The images strike a resonant chord with our 21st century consciousness. (See, for example, this shot of Sparks and Bank, 1938 or the above image of Bank and Queen, 1938. There is such a high degree of perfection with composition and lighting that seems to go beyond the ordinary government photograph. They also have a relatively objective documentary quality very different from later planning photos that were taken with a persuasive goal in mind. We know instinctively these photos are very good – they speak to us. Nothing with this calibre appears without some kind of prior training or experience. The images indicate the mark of someone (or some people) with excellent professional qualifications.

This leads me to wonder whether these photos could have been created by a photographer by the name of Eugene M. Finn. You may not have heard of him, but during the first 40 years of the 20th century, Finn was thought to be one of the best documentary photographers in Canada.

Born in Montreal in 1880, Finn had to find work at age 11 after his father – a house painter – died of lead poisoning. His first job was to help escort a blind piano tuner. He became active both as a commercial and publicity photographer, working first in 1903 for a jeweller, then for the Canadian Pacific Railway, and then variously for the Herald Press Engraving Company, the Montreal Standard, the Toronto Star, and the Engineering News Record of New York. At the start of the construction of the Quebec City bridge in 1914 he was hired by the St. Lawrence Bridge Company to record the entire process of construction, which took four years. He made a name for himself when he recorded on film the exact moments of the disastrous collapse of the centre span of the bridge in 1917.

It would appear that his photographic work so impressed the federal government that he was offered a job in Ottawa.  In 1919, he commuted back and forth between Ottawa and Montreal, finally settling at 142 Goulburn Avenue in Sandy Hill in 1921.  Outside of work, his favourite hobby was to play either the flute or the piccolo in local orchestras, including the pit orchestra at the Regent Theatre.  He also participated in several International Salons of Photographic Art held in Ottawa and sponsored by the Ottawa Camera Club and the National Gallery during the 1930s. A few of his images won special recognition, including this one on the right, 1936.

Finn’s work was as both a cameraman and a photographer for the newly formed Department of Trade and Commerce’s Exhibits and Publicity Bureau. All government departments were required to have their films and slides produced by the bureau. In 1921, the name was changed to the Canadian Government Motion Picture Bureau (CGMPB). The offices for this bureau were located at the corner of Wellington and Kent Streets. A group of photographers stand in front of the building: During the 1920s, the bureau was at the leading edge of technology and experimentation, producing – with a staff of no more than 40 people – films and still photographs of Canadian locations for other government departments, with the mandate to promote Canada’s natural resources, industry and manufacturing. The bureau received more requests than they were capable of filling and so gave priority to tasks relating to travel and tourism.

While Finn was comfortable with both the motion picture camera and the still camera, he said later that still photographs had more value in the presentation of news than motion picture film. During his early years at the bureau, he photographed the funeral of Sir Wilfrid Laurier and the 1927 Canadian Jubilee celebrations. Impressed by his work, Finn was appointed as the head of the Stills Photographic Division of the Motion Picture Bureau in 1929.

At this stage, we come to an intriguing intersection in the history of Canadian government photography.  For not only was there the CGMPB, but also a number of other highly productive but small government photographic units operating in Ottawa. There was Photographic Division of the Natural Resources Intelligence Bureau of the Department of the Interior, later the Department of Mines and Resources, which operated during the 1920s until 1933. (For more on the technical side of producing photos at this time period, see cover image above and click here.)

There was also the Photographic Branch of the Department of Public Works. In both cases, the mandate of these organizations was to produce a photographic record to bolster internal government research purposes.  Until 1934, the offices for all three organizations were located not far from each other, within the block centred on Wellington, Kent, Sparks and Bank streets.  See below and click here and here for photos of the Natural Resources Intellegence Bureau, ca. 1927: During the early 1930s when the Depression forced budget cuts to federal departments, it is even more likely that these photographic divisions shared their resources and photographers, thus allowing for a a certain amount of merging of ideas. In fact, this small group of federal photographers were even part of an association known as the Civil Service Professional Photographers Association of Canada.  This group did, on occasion, lobby the government to increase wages for publicly employed photographers, noting that the average yearly salary of $1080 to $1320 was too low, especially given the fact that the profession had progressed beyond the casual into the technical and scientific realm.  As  Finn’s boss Frank Badgley wrote, professional photographer “was no longer a skilled artisan”.

Officially, the other government branches focussed on documenting the construction of public and private buildings, as well as work on roads. This was also the era when street photography – the practice of capturing the daily life of the street – was revolutionizing the realm of private and professional photography.

In 1933, the Natural Resources Intelligence Bureau was disbanded, with employees, technical material, and collections transferred to other government organizations including the National Travel Bureau and Motion Picture Bureau.  In 1934, when the motion picture section of the Motion Picture Bureau moved out to an old sawmill on Sussex Drive, the stills photography division moved into an enlarged space at 225 Sparks Street, effectively next to the old Regent Movie Theatre.  While the motion picture division languished away from downtown Ottawa, under Finn’s direction, the stills photo division flourished.  Much of the official government photographic record for Ottawa was recorded in still photos, including visits from Winston Churchill and the Royal Family.

In 1937-38, two not altogether unrelated things occurred in Ottawa.  The pioneering Scottish documentary filmmaker John Grierson was invited by Prime Minister Mackenzie King to Ottawa to investigate how to revitalize the Canadian film industry.

Meanwhile, an urban planner by the name of Jacques Greber was also invited to Ottawa by the Canadian Prime Minister to start a grand urban plan for the city.   If Greber needed help in documenting Ottawa streetscapes, is it possible that one of the most experienced federal photographers, Eugene Finn, could have been tapped to supervise the project behind the scenes? Finn would have known which photographers would have been good for the job, yet it is interesting to see that the resulting photographs ended up being credited to the Department of Public Works.

Meanwhile, the upshot of Grierson’s investigations was that Canada needed an official government board devoted to creating documentary, if not propaganda, films.  Perhaps the extensive photographic work relating to Greber’s investigations convinced Mackenzie King of the value of an organization that could be the government’s propaganda arm. In May 1939, the National Film Board was established. This was certainly the end for the Motion Picture Bureau, but it did create a documentary film of the Royal visit of 1939, and stayed afloat for two more years, only merging with the newly-formed National Film Board in 1941.  Finn’s still photo division on Sparks Street became part of the new Still Photo division of the NFB.

The Royal Visit by ONFB, National Film Board of Canada

The National Film Board inherited a massive photo archive from both Finn and the Motion Picture Bureau. In 1946,  when Finn retired from the public service, it was reported that most of the 80,000 photos in the central stills library were by Finn. It was also reported that his colleagues lauded him for his dedication of service and the importance of his contribution to the realm of documentary photography.  In 1944, an Ottawa Journal article noted that “30,000 photos neatly filed in the stills section” at 225 Sparks Street were Finn’s work.  At this point, though Finn was being honoured for his work, the newspaper said he was a modest man,”eschewing personal publicity in the endeavour to serve the public faithfully and well.”

But, though he was held in high esteem at the time, it seems that Finn’s work has been now largely forgotten.

Although so far, no documentary proof has come to light connecting Finn to the Greber project, it is still an intriguing possibility that begs further investigation. For those of you who are interested, Library and Archives Canada has a large collection of photos taken by the Motion Picture Bureau during its operations in the 1920s and 1930s as well as a large private photographic collection from Eugene Finn, but most of these have yet to be digitized.

According to a brief Ottawa Journal entry from March 23, 1931, the Civil Service Professional Photographers Association of Canada had met the night before.  The members of the association included Eugene Finn as secretary-treasurer, as well as C.S. Collins, G.M. Elliott, E.C. Elliott, W.E. Morgan, W.S. Hutton, J.G. Dickson, J.W. Summers, Alfred Day, C.G. Smith, and A.M. Champness.  So were these the photographers responsible for Ottawa’s remarkable 1938 photos?