Skip To Content
Frank Turner and the Sleeping Souls. Photo courtesy of Spectrasonic.

Frank Turner & The Sleeping Souls are returning to Ottawa this week. They’ve played many staple Ottawa festivals including the Folk Festival (CityFolk) and Bluesfest and will be playing the Bronson Center for a second time this Saturday, March 12th at 7 p.m. Spending most of his time on the road, Turner was in Vancouver when he gave Apt 613 and call to discuss his latest album, his “proper Canadian tour” and his perspective on the industry. Read our Q&A below.

Yea, I’m in the middle of what I’ve been calling my “first proper Canadian tour” but I’ve obviously been to Canada many times before. But every time has been a case where Canada has been a detour from the American dates. This time around we’re just doing a Canadian tour before head. So we start in the Maritimes and we travel all the way to the West Coast, I’m in Vancouver right now. And then we’re turning around here and we’re coming all the way back to Montreal via Ottawa. It’s a lot of miles, it’s all Canadian shows, and it’s been great. We’ve been to some places that, I’ll be honest, I’d never even heard of before. We were in Thunder Bay the other day, that was great. We were in Kelowna last night. We’ve been to Red Deer and to the Maritimes. It’s been wonderful. I’m always keen to go to new places, and I’ve seen some really good parts of Canada.

Do you get a lot of opportunity to visit any tourist spots?

Not as much as some people seem to think. I’m constantly reminding my mum that I’m not actually on holiday. But you know I try and make time during the day to go out and eat if I can. Or if there’s something to go and see I’ll pop out and walk around alone and go see museums and that kind of thing.

You’ve been in Ottawa quite a bit, is there any particular location here that you’re especially fond of?

I’ll be honest, I haven’t had that much time to walk around in Ottawa. The cliche of touring is that you travel around the world and see a lot of dressing rooms and car parks and hotels. And it is true, to a degree. But the flip side of it, which people often forget to mention, is that you meet people. So while I can’t tell you masses about the civic architecture of Ottawa, I’ve got a lot of friends that I’m going to see when I’m in town there and I’m excited to see them and catch up.

Have you had any memorable adventures during your Canadian tour?

Yea well I’ve had a lot of adventures when I’ve been in Canada. I was just thinking about the first time I was in Winnipeg and I had a day off before the show. I got kidnapped off the tour bus. I mean day’s off on tour are really important because you need to recuperate. But the guys from Off with Their Heads, and two other punk bands that I know, were in town and they kidnapped me, grabbed the guitar and shoved it into my hand and shoved me into a bar and forced me to play another show just for them that night. Which was a lot of fun but I was also terribly exhausted the following day.

Is there something that comes with you where ever you go?

Yea well my laptop is pretty crucial to my existence. My guitars too but we typically have different guitars that go to different parts of the world these days. The guitars that are very special to me stay at home because I don’t want to mess them up on the road. But my band and crew are the important thing; people, more than objects. I’m not a particularly materialistic person, so it’s more important to me to have my band and my crew with me.

I must mention your last album (Tape Deck Heart) which, according to your interview with Independent, was inspired by a break up. I absolutely love your single Recovery, I’ve listened to it on repeat. But can you speak a bit about this new album, which dropped last August, and it’s inspiration.

Yea, Tape Deck Heart was a record about a break up and it was a huge thing in my life and the events that it was discussing were a big deal. But it was also like the most amount of time we’d ever spent in the studio and we toured it harder than I’d ever toured anything. It was the most successful record as well. And so with all of that sort of done and dusted I really wanted the new record (Positive Songs for Negative People) to be more upbeat and a bit lighter on its feet. So the songs are more about recovering from a bad time, sort of picking yourself up and dusting yourself off, and defiance and being optimistic. But also, just in terms of how quickly we recorded this new album: we played it live, we cut the record in 9 days. So it’s suppose to be a clearer headed, lighter-hearted thing than it’s predecessor.

Watch the video for “The Next Storm,” from Positive Songs for Negative People below:

You’ve got a bit of a reputation as a punk troubadour which you’ve picked up through your youth growing up in London. Do you feel that this remains true or do you feel your muse changing as your career unfolds?

Well, I hope my career changes and I hope I change as an artist. There’s a weird sort of conservatism in the music world where people want bands and artists to remain exactly who they were when they first discovered them. And I think that’s BS personally. You know, I think it’s my duty to change. Plus also, if I go around and do two thousand shows all around the world in a decade, I’m not going to come back as the same person as when I left. I wouldn’t want to, that would be weird. And I don’t want to keep making the same record. But with all that said, there are certain kinds of principles that underlie things and growing up with the punk scene in London was my formative years. All of my kind of ethics and thinking about music comes from that and that’s unlikely to change.

It seems that you are a very hard working individual, constantly on tour, or recording, or writing. I know that the typical answer to my next question is that the audience is heavenly but the traveling is hell. But can you speak a bit to the ups and downs of the artistic lifestyle and what it’s like to have the freedom to be so creative on such a constant basis?

Well I’m certainly very fortunate to do what I do. I’m my own boss and I do my passion for a living, and not many people can say that. I mean, there are obviously restraints on it. There’s a business side to what I do and there are budgets to be thought about and I have to promote an album once I’ve made it, all this sort of thing. I’m not 100% at liberty, but I don’t think anybody is really. But within those parameters I’m very fortunate to live a creative and free life. It took a lot of time and effort to get to this point and I’m very defensive of it. But you know, you have good days and bad days, same as anything else really. There are days when I just want to pack it all and go home and days where I want someone to tell me what to do, but for the most part this is a lifestyle that was built after quite a lot of effort and I’m in favor of it.

What is you favourite way to connect with you fans and have a sort of dialogue?

Well I consider myself to be an entertainer first and foremost. If you look at what I spend most of my time doing, it’s playing shows. I obviously write songs and record them and all that sort of thing, but I spend way more time performing those shows in a live environment. I love playing live because you’re in the same room as your audience and you communicate with them directly, live and in real time. To me there’s something faintly unofficial about recording, as a concept. I mean obviously it’s an art form in itself and it’s necessary and that sort of thing, but I much prefer to play something in front of people.

Lastly, Ottawa has a lot of up and coming artists, what’s some advice you’d give them in regards to success?

Well I could get into a bit of the details of the process of what you do but the main thing is just, kind of, hard work makes it’s own luck. I feel it’s always been true, but particularly in the internet world that we live in now. If you’re a young and up and coming artist don’t just wait for people to bring things to you. Just get out there and do them. If no one wants to put out your record, just put it out yourself. If no one’s booking your shows, book your own shows. There’s a million things you can do everyday and if you do them then the world will come to you.

Frank Turner and The Sleeping Souls perform with Northcote and Mo Kenny on Saturday, March 12, 2016 at the Bronson Centre Theatre. Doors at 6:30. Tickets are $35 and available at Vertigo Records or online. 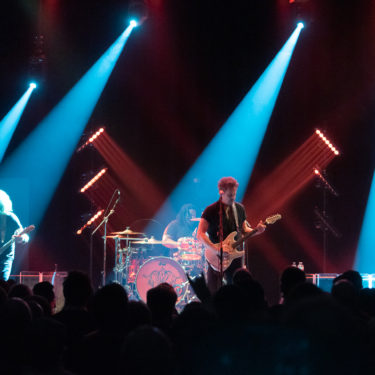