For five years, North & Navy has been delighting Ottawa diners. Located at 226 Nepean St., the charming brick house formerly home to Beckta Dining & Wine, North & Navy has made the space all their own. They are well-known for their welcoming atmosphere, wine list, and unique take on northern Italian cuisine, which is at once inventive and rooted in tradition.

As head chef and part-owner of NoNa (as its many admirers have come to call the restaurant), Adam Vettorel has been there since before the doors opened. He honed his craft working under such notable Ottawa chefs as Steve Wall and John Taylor. Many accolades have come his way since the long-ago winter evening that was North & Navy’s first service. But equally as impressive is the list of things Vettorel and his team have accomplished since March 15, when the coronavirus forced their doors closed. The speed at which the situation evolved was terrifying to small business owners. Many lacked the reserves to sustain a closure of undetermined length. Vettorel’s first thoughts went to his staff, many of whom have been with the restaurant for years.

“We had just gotten in an order of all these beautiful heritage vegetables from the local farms we work with. As Chris [Schlesak, co-owner] and I discussed what to do, I started making a huge batch of minestrone to send home to all the staff,” recalls Vettorel. “I didn’t know what else to do at that point. It was all so surreal, but I wanted to let them know that they’d be taken care of.”

This attitude coloured the next decision made. On March 18, just three days after closing, North & Navy began offering takeout. They were one of the first Ottawa restaurants of their calibre to do so, and again, the safety of the crew was of paramount importance.

“I didn’t know what else to do at that point. It was all so surreal, but I wanted to let them know that they’d be taken care of.”

“Our first concern was always the staff,” Vettorel reiterates. “We laid them all off pretty quickly, to not only keep them safe, but to give them the choice of how to proceed. Takeout was the first viable option to get people back to work, if they felt safe in coming back, but we had to tailor it to be safe. We made the menu so it was executable by a small crew, and split the cooks into two-person pods. Each cook only had contact with one other person. The servers were kept pretty sequestered from the kitchen as well.”

For those who couldn’t come back right away, or didn’t feel safe doing so, the restaurant was there for them as well. The management team at NoNa became kind of a hub, helping their staff navigate the sometimes-confusing language of EI/CERB applications. As the team became more adept, staff and managers from other Ottawa restaurants began to seek their aid.

“It wasn’t our plan to become a hub,” says Vettorel. “We just started diving into what had to be done, finding out what it meant to lay off your staff. Gabrielle [Boudin, restaurant manager] and Chris are really handy with these kinds of things, and they got everyone organized. We had the answers that people were looking for and we wanted to share them.” Vettorel and Schlesak felt that by keeping their staff safe, they were also taking steps to keep their customers safe. However, there were more people out there that needed assistance. This led Vettorel to work with Joe Thottungal, of Coconut Lagoon and Thali, who had organized a massive effort with Ottawa’s Food for Thought Meal Fund.

“It was an amazing experience, to be able to help these people that really needed it. Joe pulled a great group together and it was an honour to be a part of it.”

Inspired by that experience, as of April 7, North & Navy provides lunches for essential workers at the Ottawa General Hospital and CHEO once a week.

Since then, North & Navy has debuted a small but charming patio next to the restaurant. They’ve even opened indoors for some distanced dining.

“A lot of deeply worrying things have happened, but I choose to remain confident in what I see. There will still be an industry after all of this. Restaurants will survive in the new normal.”

Through all the recent difficulties and setbacks, Vettorel has remained focused and dedicated to his staff, his clientele and his peers.

“A lot of deeply worrying things have happened,” he says, “but I choose to remain confident in what I see. There will still be an industry after all of this. Restaurants will survive in the new normal.”

Vettorel feels especially optimistic about Ottawa’s chances of navigating a second wave and beyond with a minimum of trouble.

“I think we’re all very fortunate to live in Ottawa. People are really respecting the rules. We’ve had maybe one gripe about the mask rules? Folks are very patient with the delays and protocols we’ve had to enforce. Maybe that means we’ll be rewarded by being able to open a little sooner.”

Until that time, Vettorel has enough to keep him busy. In addition to his work at NoNa, he’s started a podcast about the Ottawa restaurant scene and is in the process of opening a second restaurant with Schlesak. And while we have entered a second wave, there’s only one course of action in mind.

“We’ll do what we’ve always done,” says Vettorel, “and hopefully it’ll be enough.”

That means going above and beyond for the people associated with the business they love.

North & Navy is located at 226 Nepean St. Distanced seating is available inside or on the patio, weather permitting. Takeout is available by pre-order. Call 613-232-6289 to place an order, or view the menu at www.northandnavy.com. 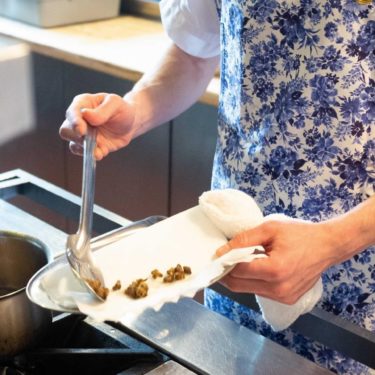