Ottawa’s hottest up and coming alternative rock band Mosely hits the stage this weekend for another round of Live 88.5’s Big Money Shot. Mosely has been making their mark in Ottawa for the last several years and their new single ‘Friends’ is a rock ballad that further solidifies the bands staying power.

Mosely shares the stage at Ritual tonight with other local talent Crossing Jane, Hello Hello, White Collar Students and Weston Super Mare Band. Together for several years now, the band has been playing local bars and clubs picking up fans in droves along the way. Front-woman Dani Poisson perfectly balances the bands sweet serenades while seamlessly flipping into their grittier rock and roll for the harder tracks, giving every fan something to listen to.

The rest of the ensemble (Matt, Mike and Eric, respectfully) don’t hold back either, living by the motto ‘Make em’ feel something’. And feel something you will. With tracks like ‘Wait With Me’ and their new single ‘Friends’, each song has such depth and feeling over topics like break ups and betrayal that any audience can identify with, and the no holds barred show that the band puts on will have you moving in your seat. By the end of the second set, you’ll be singing along to their tracks and looking for their stuff on Bandcamp to belt out in the car.

So why is the Big Money Shot such a big deal in Ottawa for local musicians? “Big Money Shot is helping put Ottawa music on the map by giving musicians like Mosely greater access to industry pros, their advice and the ability to work one-on-one with them.” Says Poisson.

“We went into Big Money Shot thinking we’d meet other bands in Ottawa and maybe build our Ottawa fan base, but it has vastly exceeded our expectations. I think what has helped us most in terms of the competition side of things is that we’re ready for criticism and willing to take advice. Ego does you no good if it gets in the way of taking some seriously helpful pointers from people who have been around the block.”

The Big Money Shot doesn’t just open doors for a wider viewership and fan base, it also connects musicians with local songwriters and producers that can develop into incredibly lucrative partnerships. “No joke, we met a really cool songwriter and we loved working with Steve Foley so much, that we’ll be going back into the studio with him to record an EP.” Poisson says, hinting at more great music to come.

Coincidentally, front-woman Dani Poisson’s birthday is also the same night. In celebration, Mosely has encouraged wild outfits for the occasion, as well as giving out prizes for the loudest fans and having cupcakes on hand. Come out and support your local talent!

Check out Mosely’s video for ‘Wait With Me’ below:

The Big Money Shot takes place September 11, 2014 at Ritual Nightclub. Doors at 7pm. Tickets are $8. Follow Mosely on Twitter, or check out their Facebook page. You can also listen to them Thursday on Lunch Out Loud Ottawa, or keep up with them and their stomachs as they tour on the bands blog Mosely Eats. Tanika Charles two-steps into Ritual on May 14th 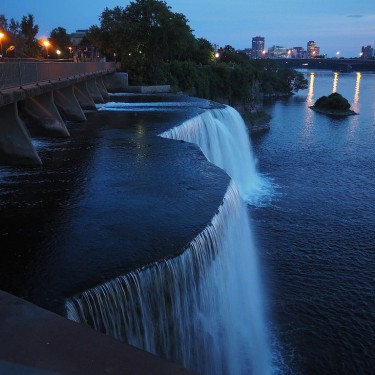