Skip To Content
All photos courtesy of Audra Sherman.

Christine Sinclair is a legend.  Her play at the 2012 Olympics and last years Women’s World Cup proved she is one of the best that has ever played.  But she can’t play forever, which got me thinking…. Could the next Christine Sinclair come from Ottawa?  If she does, she’ll probably be a product of the Ottawa Fury FC Elite Girls Academy.  We spoke with Audra Sherman, head coach for the Girls Academy, about the Academy, the options girls have at the elite level, and what it takes to get there.

Audra is originally from Montreal and played as a striker at some of the highest levels on the continent.  In the NCAA, Sherman played first for Clemson, before transferring to Hofstra University.  She then continued her career in the USL W-League, playing for Western Mass, the Laval Comets, and New York Magic.  Sherman has been coaching professionally in Ottawa for about 5 years now.  She coaches the Elite Girls Academy, which is a U18 squad (girls ages 14-18), and the top level girls team in the Ottawa Fury organization.

If you’re a young player and think you have what it takes to make the team, there are ways to get noticed.  The Academy works with community clubs in the Ottawa area to identify high-potential players, in addition to holding open tryouts.  Girls who make the teams currently play in the OYSL (Ontario Youth Soccer League) U18 Division 1, and generally play Toronto-based teams.  As Sherman describes, however, the program and the development system in Ontario is in flux.

The Elite Academy is a stepping stone, and part of being coach of the Academy is making sure the next step for each player is the right one. 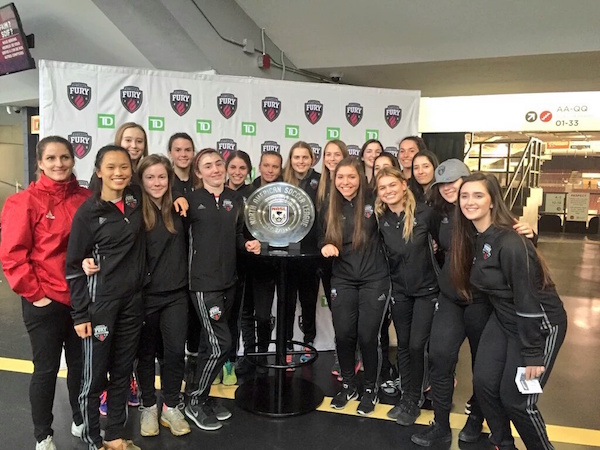 The team poses with the NASL 2015 Fall Season Championship plate.

“The whole system is changing right now, this year we’re going to play U18 OYSL, and then we’re looking at various options for next year. I believe our program is going to change the way it looks going into the 2016-2017 season.  Last year the Ontario Soccer Association launched a semi-pro league, League1 Women.  We have something being phased in called the Ontario Player Development League.  Currently the highest level is U15 [with older age groups being phased in].  We’re aiming for more of a League1 idea there, but we’re still in discussions with where we’re going to take this program when we get to the 2017 season.”

So what qualities do Sherman and the Fury look for in new recruits?

“The first thing is mindset, and their desire to grow and compete.  That’s bigger for me than the technical and tactical side.  What’s the commitment level and what’s the desire like. To be able to go anywhere in this game, or any sport, you need to have that mindset.  Next would be technical ability and skill.  I want really creative players, players who are unique, I don’t want all my players to be the same.”

“We’re looking to help place girls in collegiate programs, as well as in the national program.  We have a few identified “national” players, and one who is actually part of the U20 team who went to CONCACAF this past year.”

“Right now, between the U.S. and Canada, our placement rate in universities is 100%.  Everyone moves on to playing at the collegiate level.”

“Our goal is to pair them.  One of our players just signed to play at Notre Dame, another at [University of] Vermont, but not everyone wants to go to the U.S.  They don’t all want to play at a top U.S. sports school.  We have some great academic programs here in Canada, and some girls want to stay in Canada.  When girls enter our program, we get to know them, and build a profile of what they’re looking to do, and then put a personal development plan together so they they can reach their goal.  Some girls come in at 15 and think they really want an American scholarship, but by the time they’re 17 they decide they want to stay in Canada.  Our goal, when they move on, is to make sure they don’t just make the team, but that they start as one of their strongest players, or have the ability to work their way into the starting lineup within the first year.”

In terms of a post-collegiate career, the ultimate goal, besides playing for Team Canada, is to play at the professional level.  The women’s professional game is growing around the world.  Though there are currently no professional teams in Canada (yet), there are many options at that level if that’s the goal a player wants to pursue.

“Most of our senior national women’s players play in the NWSL [National Women’s Soccer League] in the U.S., and many play in leagues overseas, like in Sweden, England or the German league.  Overseas there are actually a lot of opportunities for women at the professional level.”

When asked about one day having a professional women’s side in Ottawa, Sherman is hopeful.

“That would be awesome if we could, to be honest.  I think we proved with the W-League that there’s a need for it, and it’s hopefully something we can build towards.  Our focus is obviously, and should be, to build our NASL men’s side, and then continue to build on the women’s side as well.  It’s definitely a goal of mine, personally.”

For now, Coach Sherman focuses on the Elite Girls Academy, a job she loves.

“There are so many great things [about coaching the Girls Academy].  Some of them are in the program for 4 years, so you really see that growth and development.  I love coaching and I love helping them achieve what they want.  It’s also great facilities and a great organization to work with.”

If you’re a young girl who thinks a career in soccer might be in your future, or just a soccer fan looking to support the sport locally, all Academy home games are open to spectators. See the schedule below: “Definitely, I think the more exposure we have, the better.  We’re really trying to bring more exposure to the girls side of the program.  It’s still in the development stages, but yeah we’d love it for people to come out.”